A radio is not the only way to communicate (nor is yelling between cockpit and foredeck during docking!). Often, it can be hard to make out a voice message due to interference or static. In such situations, a backup plan is to spell the message. Because some letters sound similar, a phonetic alphabet was developed.

Before the advent of radios, flags were used to communicate. Over time, a very specific pattern of flags was developed and remains in widespread use today.

Although you may never see them displayed except at yacht clubs, naval establishments, areas with international shipping traffic and sailing events, international code flags are used to signal between two ships or between ship and shore. They are a set of flags of different colours, shapes and markings which used singly or in combination have different meanings. The flags include 26 square flags which depict the letters of the alphabet, ten numeral pendants, one answering pendant, and three substitutes or repeaters.

Only a few colours can be readily distinguished at sea. These are: red, blue, yellow, black, and white; and these cannot be mixed indiscriminately. You will notice, for clarity, the flags shown are either red and white, yellow and blue, blue and white, or black and white; besides plain red, white, and blue.

One-flag signals are urgent or very common signals (see meanings below). Two-flag signals are mostly distress and manoeuvring signals. The remaining flag groups are less-frequently seen outside of naval or shipping circumstances.

Click here to go to the Free Resources page for a full-size copy. 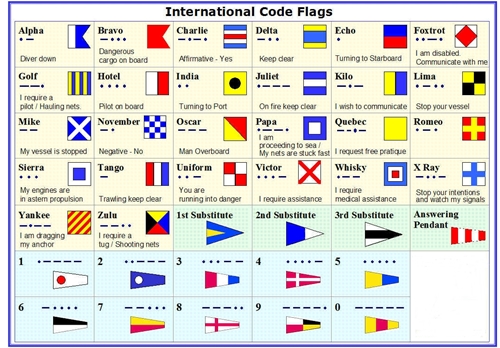 Return from Phonetic Alphabet to Communications

Check out our great deals on quality radios from Standard Horizon